Biohazard Dangers in a Hoarding Situation

The hoarding condition can be very difficult to overcome.  Oftentimes, hoarding tendencies are as confusing as they are dangerous.  Hoarders can endanger themselves, their families, and even their neighbors due to their debilitating condition.

To the surprise of many, hoarding does not stop with newspapers, boxes, clothing, and knick knacks.  Some people hoard food, garbage, chemicals, flammables, medication, and even feces, urine, and other bodily fluids.  It is imperative to find the right hoarding cleaning service provider who is capable of handling the hard work of removing large quantities of items as well as properly dispose of and sanitize biohazards. 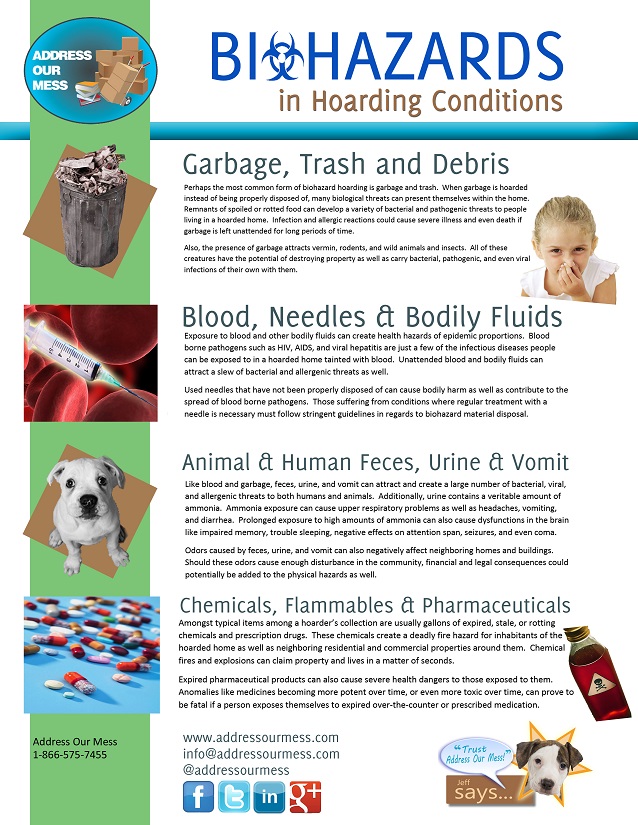 Perhaps the most common form of biohazard hoarding is garbage and trash.  When garbage is hoarded instead of being properly disposed of, many biological threats can present themselves within the home.  Remnants of spoiled or rotted food can develop a variety of bacterial and pathogenic threats to people living in a hoarded home.  Infection and allergic reactions could cause severe illness and even death if garbage is left unattended for long periods of time.

Also, the presence of garbage attracts vermin, rodents, and wild animals and insects.  All of these creatures have the potential of destroying property as well as carry bacterial, allergenic, and even viral infections of their own with them.

Blood, Needles, and Other Bodily Fluids

Exposure to blood and other bodily fluids can create health hazards of epidemic proportions.  Blood borne pathogens such as HIV, AIDS, and viral hepatitis are just a few of the infectious diseases people can be exposed to in a hoarded home tainted with blood.  Unattended blood and bodily fluids can attract a slew of bacterial and allergenic threats as well.

Used needles that have not been properly disposed of can cause bodily harm as well as contribute to the spread of blood borne pathogens.  Those suffering from conditions where regular treatment with a needle is necessary must follow stringent guidelines in regards to biohazard material disposal.

Animal Hoarding Cleanup Service providers will be the first to attest that bodily fluids in a hoarded home do not always come from animals.  Like blood and garbage, feces, urine, and vomit can attract and create a large number of bacterial, viral, and allergenic threats to both humans and animals.  Additionally, urine contains a veritable amount of ammonia.  Ammonia exposure can cause upper respiratory problems as well as headaches, vomiting, and diarrhea.  Prolonged exposure to high amounts of ammonia can also cause dysfunctions in the brain like impaired memory, trouble sleeping, negative effects on attention span, seizures, and even coma.

Odors caused by feces, urine, and vomit can also negatively affect neighboring homes and buildings.  Should these odors cause enough disturbance in the community, financial and legal consequences could potentially be added to the physical hazards as well.

Hoarding experts must tackle feces and other bodily waste cleanup using personal protective gear that will keep airborne pathogens and bacteria from harming them.

Amongst typical items among a hoarder’s collection are usually gallons of expired, stale, or rotting chemicals and prescription drugs.  These chemicals create a deadly fire hazard for inhabitants of the hoarded home as well as neighboring residential and commercial properties around them.  Chemical fires and explosions can claim property and lives in a matter of seconds.

Expired pharmaceutical products can also cause severe health dangers to those exposed to them.  Anomalies like medicines becoming more potent over time, or even more toxic over time, can prove to be fatal if a person exposes themselves to expired over-the-counter or prescribed medication.

Hoarding and Clutter Cleaning Service providers have the experience and certifications necessary to properly, efficiently, and legally dispose of biohazard materials.  It is important to call on certified professionals to take on this potentially dangerous task.