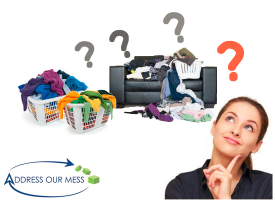 From the outside looking in, it can be hard to understand hoarding behavior.  Living conditions look uncomfortable, the home can be unsanitary, and the sheer amount of objects impedes a hoarder’s ability to move around and utilize the space in their home.  Even though this seems unusual from a non-hoarder’s perspective, hoarding seems natural for most people who live in the situation.  This is primarily because hoarders actually have different psychological processes that compel them to hoard.

A hoarder’s brain literally stops them from throwing things away.  A study was done by the Institute of Living where researchers scanned hoarders’ brains while asking them to throw away some of their items.  They found that there was increased activity in the decision making part of the brain compared to the brain scans of non-hoarding adults.

It’s hard for a hoarder to make decisions because they have anxiety about making the wrong choice.  Every decision they make comes with the loss of what they didn’t choose and that causes anxiety, indecisiveness, and sadness.  Throwing items away is a decision, so if they simply keep all their items they never have to make a choice.  Not making choices means never dealing with the loss of anything.

You can physically see what part of the brain is affected by hoarding, but there are still many potential reasons why it reacts this way.  No one starts hoarding from birth, so figuring out what triggers this part of the brain to go into overdrive can be a little harder.  Common reasons why people hoard include trauma, isolation from others, and ties to hoarding family members.

Hoarding is often triggered by a traumatic loss or event.  Common contributors include divorce, childhood poverty, and death of a loved one.  People can start hoarding after such events as a way to avoid grieving.  Hoarding becomes a comfort that can allow them to avoid working through the pain of their trauma.

Isolation from other people is also a common reason why people hoard.  This is often the case with senior citizen hoarding.  As their children and grandchildren move away they are left increasingly alone, especially if they are retired and widowed.  This causes people to seek comfort in belongings instead of other people.  Once this happens it’s easy to become attached to objects and it’s hard to get rid of anything.

The International OCD Foundation reports, “50 to 80% of people who hoard had first-degree relatives whom they considered ‘pack rats’ or hoarders.”  We learn our behaviors through what we’re exposed to and growing up around hoarding behavior can cause someone to exhibit those tendencies in adult life.

Getting treatment for hoarding is a two-step process.  First, the psychological reasons for hoarding need to be addressed.  There are many options available including therapy and support groups.  After they accept psychological help, the second step is to begin the physical cleanup of the home.  Trying to clean a hoarded house can be way too overwhelming for one family or person, so companies like Address Our Mess will work with hoarders to sort, organize, and deep clean their homes and return them back to livable condition.